I worked so very hard on this shirt, but it just didn't work out. 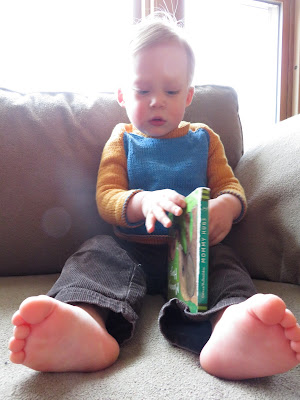 You might not notice it in the picture above, but the hem is flipping up, the shoulders are bunching up, and the collar is standing up. 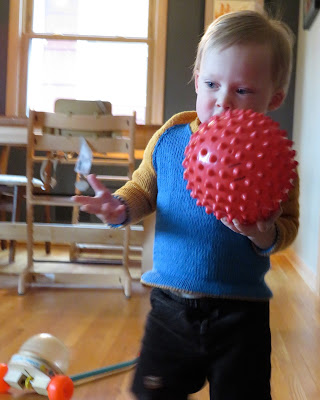 Definitely noticeable in this picture, though! The shirt is also pretty tight - I knit the 24 month size, but I had to squeeze it over Ethan's 19 month head. He has an average-sized noggin. The sleeves were also quite snug. I'm not quite sure where things went wrong, but this is my biggest knitting fail in a while. I used a less-drapey yarn than what the pattern called for. I measured Ethan one day, but didn't finish the sweater until about 9 months later. I made a bunch of mistakes and frogged repeatedly. I think I fixed the errors and followed the pattern, but I'm not going to double-check my work. I realized I don't like the turned-hem with baby garments - it took sooooo long to knit, and I think it looks odd with such bulky yarn and such a tiny garment. I would use a turned hem on an adult sweater, though. I'm also pretty proud of the raglan seams. I would also use those on an adult sweater as well. So I'm looking at this as a toddler sweater fail, but successful practice for my next sweater for myself :)