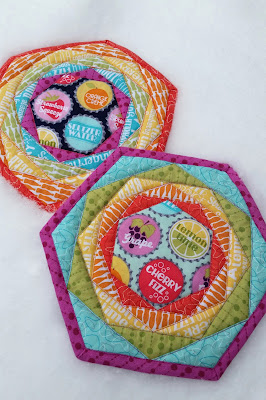 I love these trivets! This is at least the third set of Happy Hexagon trivets I've made. The pattern is from Patchwork Please. It's so fun and easy, and they always turn out great. The fabric is Emily Herrick's Sodalicious, which I've admired since seeing it at Quilt Market last spring. I've got another set of Sodalicious trivets in the works, and I'm working on fabric pulls for a couple other sets, too.

Posted by carrie at 7:00 AM No comments:

Members of the Minneapolis Modern Quilt Guild are working on the Good Neighbors Challenge this month. I just finished mine (6 days ahead of the deadline!) and I am so thrilled with it! 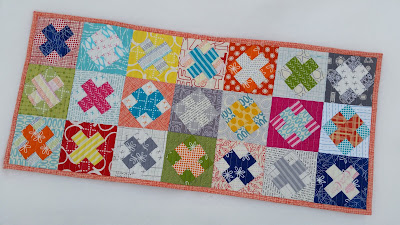 I made a small table runner (13" x 30") mixing Amanda Jean's Good Neighbors fabric with bits from my stash. I wanted to make something scrappy, using a bunch of fabric lines, which is usually a stretch for me. But this fabric line is filled with great basic blenders, so it was easy to mix and match it with other fabrics. I used the Raspberry Kiss block tutorial by Wooden Spoon Quilts. The block is soooo cute, goes together quickly, and I have seen so many amazing scrappy projects made with that block lately!

I'm linking up to Crazy Mom Quilts Finish it up Friday. This is the third project I've finished this month - I'm on a roll!
Posted by carrie at 4:52 PM No comments:

The small boss requested an R2D2 hat for himself. And then another one for "his baby". I think he did this mid-December, and requested them for Christmas. Then he demanded them before Christmas, because waiting is hard when you're five years old. I got the big hat done before Christmas, but the little hat wasn't finished until January. The hats were fussy to knit, but so worth it. I love my two R2D2s!

I used this free pattern on Ravelry. The pattern was written for intarsia, but I hate seaming knits and I hate weaving in ends even more. The finished product probably would've looked a little better, but there was no way I could finish weaving in 50+ ends (per hat!) in a month. So I modified the pattern to be fair isle, which was a different challenge - with such long blocks of color (sometimes 10 stitches) I had to worry about catching the floats on the wrong side. I can see where the floats are caught, and some uneven tension where colors switch in the finished hats. The construction was difficult, and the final product isn't as neat as I'd like, but the kiddos love them. These took surprisingly little yarn - I have enough left for at least one more medium size hat.


I used blue and white Plymouth Yarn Worsted Merino Superwash, and random scraps of black and red worsted wool. The big hat was knit on US6 and US7 needles, and the small hat was on US4 and US5 needles. I plan to make a medium with US5 and US6 for Ethan next winter.
Posted by carrie at 6:00 AM No comments:

Looking back / looking ahead

I didn't realize how many projects I'd finished last year until I looked through my Instagram and Flickr feeds this week. My 2015 stats are:

That's so much stuff! And I know that's missing a bunch of projects I forgot to photograph before I gifted them away. I've got big plans for this year, too. My 2016 goals are to finish:


I've already started tackling the organizing project, and I've got a couple quilts in the queue. I'm making an effort to take more photographs, so expect more blog and Instagram posts, too :)
Posted by carrie at 2:00 AM No comments:

Email ThisBlogThis!Share to TwitterShare to FacebookShare to Pinterest
Labels: goals

2016 is off to a promising start! I've already finished not one but two pillow covers. I used a 1950s palette of grey, coral and turquoise. The pieces were all die-cut using a Sizzix machine at my friend Lisa's studio. It only took an hour to cut the pieces  - I'm confident that's quicker than rotary cutting by hand. Using a die-cutter also saved me the hassle of trimming half-square triangles, which I hate. 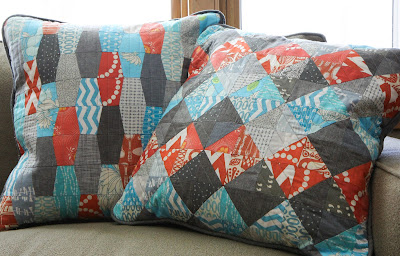 I made essentially a 20" mini quilt for each pillow top, then trimmed the top down to 19". The piping is made of 1.5" strips of bias-cut fabric,  6/32" cotton cording, and glue-basting. Glue-basting was the secret ingredient - it worked out soooo much better than machine-basting the piping with my zipper foot. I glue-basted the piping to the pillow top and machine-basted the whole thing with a zipper foot. I sewed the pillow front and back together using Clover WonderClips to hold everything in place, and a 1/2" seam allowance. I was dreading the assembly with a quilted and zippered back, but using the right tools (instead of a million pins) made all the difference. 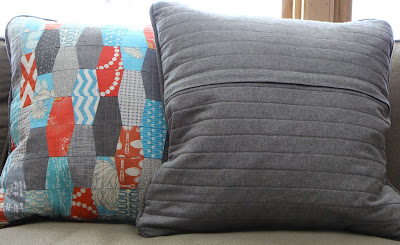 The backs are Essex yarn dyed linen. I'm pretty proud of the way the zipper flap covers the zipper - this is my first zippered pillow back! The pillow covers fit 20" IKEA feather pillows beautifully. These were a breeze to make, especially the tumbler pillow. Piecing is so easy when all your pieces are the exact same size. Funny how that works. I'm already planning my next Sizzix project!