Joel and I have been working on a super-secret birthday surprise for Isaac: an A-frame tent. 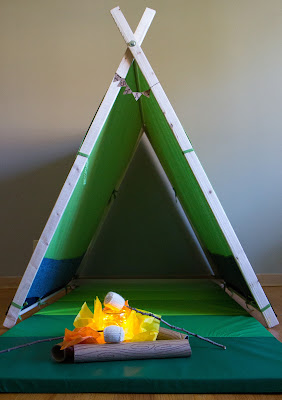 Joel built the tent frame using this tutorial as a guide. He added a brace in the back and the silver caps to both ends of the top pole, so the tent can't be easily knocked over or accidentally collapsed. I made the fabric cover from an IKEA fitted sheet and some navy quilting cotton I had in my stash. I used a bias tape maker to make the ties that attach it to the tent frame. The green matches the PLUFSIG gym mat nicely. 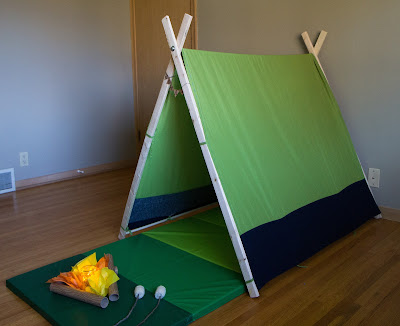 I also made a pretend marshmallow roasting set, which makes for a super cute picture but I'm sure it will be dismantled in seconds. The fake logs were cut from a (surprisingly sturdy) wrapping paper tube. I doodled a faux bois pattern on them with a Sharpie. The campfire is a string of battery-operated LED lights inside a half-pint canning jar, surrounded by tissue paper fluffs. I knit a pair of marshmallows out of single-ply yarn and stuck them on twigs I found in the yard. I fully expect the twigs to be used as weapons within the first 2 minutes. After that they'll be returned to the yard. 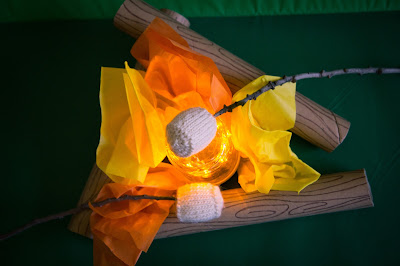 If you want to knit your own marshmallows, see my pattern post here.
Posted by carrie at 1:00 AM