The Candy Land quilt is done! It's on its way to its new home today. 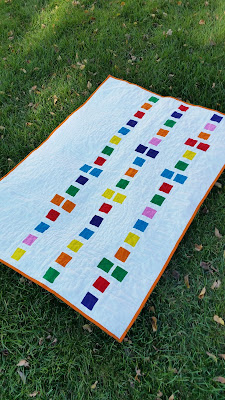 I was unsure of the quilting at first, but it grew on me. It helped that other MMQG members complemented it as I quilted it during our retreat last Friday. It's always nice to get reassurances from people who know what they're doing :) I used my walking foot to make curved lines, resembling the winding path on the board game. The lines are a little wonky. Some of the wonkyness is on purpose, some not. After washing and drying the quilt my doubts are gone - I love this quilt! 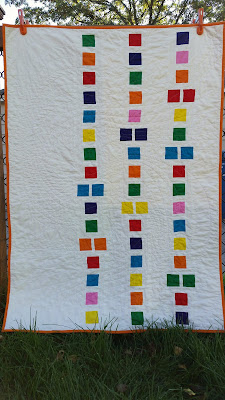 The quilting is more noticeable on the back. I used some of the leftovers from the front and a random scrap of blue Kona (bottom left) from my stash. 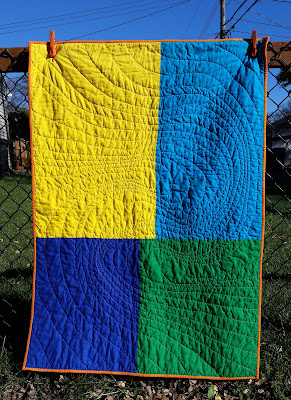 I prewashed the fabric, all Kona cottons, in hot water and sent them through the dryer. I washed the light colors separate from the dark, and I washed the white by itself. The Clover Kona did backstain the white background a tiny bit when I washed the finished quilt in cold water with two white towels and three color catchers. I won't say I'm surprised... I've had problems with red and blue Kona bleeding before, too.

This quilt turned out just as I'd envisioned it when I started sketching designs and doing math. It's so nice when that happens!
Posted by carrie at 2:00 AM