Now I can make any beer a Duff beer! 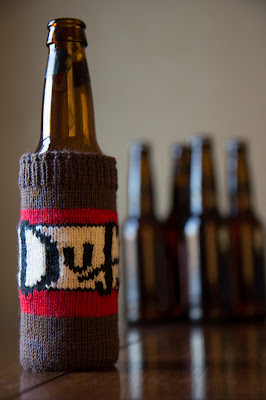 This has been in the works for at least a year. I tried to do this in the round with three-stranded fair isle, but that just turned into a very large knot of yarn in a hurry. I finally settled on intarsia to make the Duff logo. It was quite fiddly, there was a seam to sew and many ends to weave in. I love how it looks now that it's blocked, though! I used Dale of Norway baby yarn for this project. It used approximately 2% of 4 skeins of yarn, so I could (and I may) make a whole set of these.

I put the pattern on Ravelry here. Cheers!
Posted by carrie at 10:29 AM