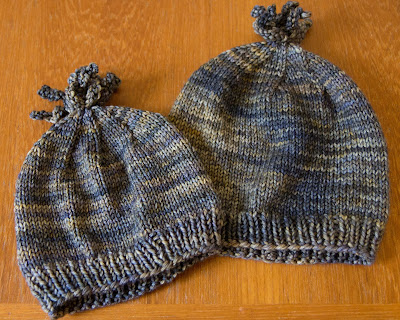 Really, I knit a hat-shaped gauge swatch and then I knit a hat for Isaac. I had intended for the hat on the left to fit Isaac. I knit the 19" size using US7mm needles and Malabrigo Rios yarn, but it is a tiny bit tight and about an inch too short. I figured why do a gauge swatch - I have plenty of yarn, I have two different-sized kids so the hat will (eventually) fit one or both of them, and with the other hats in the book my gauge has been spot-on. This time my gauge was off, probably because I used a worsted yarn instead of an aran yarn.

Isaac tried on the first hat and demanded a new one immediately after I declared it too small. I knit the pattern for a 21" hat with an extra inch in length and it fits well. He wore it to the bus stop all last week, when we had leaves instead of snow on the ground. He really likes the fluffy bit on top, and so do I - it is much cuter than a pom-pom. 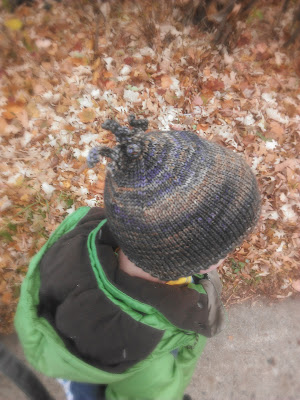