We are making a big deal out of Halloween this year. We have read spooky books every day for weeks, we got a pumpkin (although we didn't carve it), made a spider thaumatrope, baked and decorated cookies. I made some new decorations. 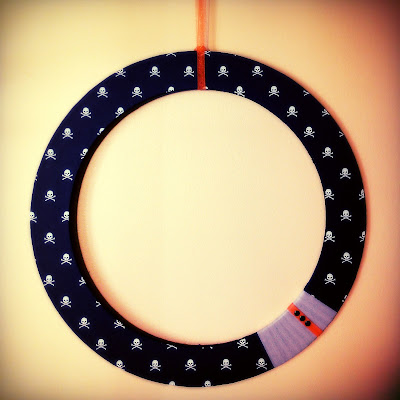 A really simple wreath. I used a wreath form and skull and crossbones paper from Paper Source, ribbon scraps, and three metal stickers. The hardest part was coloring the edges of the wreath form with a black Sharpie. 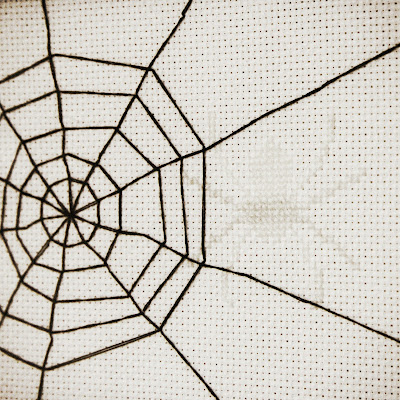 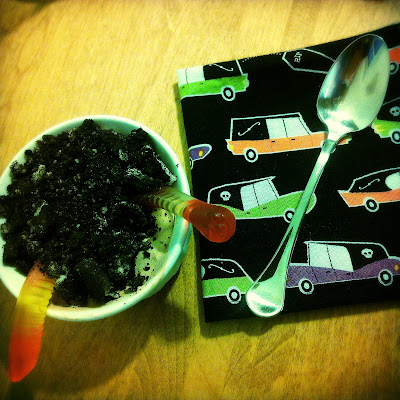 Dirt cup and a cloth napkin made from Robert Kaufman's Eerie Alley fabric.

But the very best part of Halloween this year is Isaac's costume. We asked what he wanted to be a month ago, and he said "An Aquabat!" I half-heartedly tried to talk him into being Batman or a hockey player - both things that he really likes, costumes that would be much easier to make, and other people would actually recognize the costume - but he had his heart set on Aquabat. He loves the Aquabats Super Show, which we discovered this year and is conveniently available on Netflix streaming. It is such a goofy show, and it makes me sooo happy to see him enjoying it because I love the Aquabats, too! I first heard of them over a decade ago and have been a fan ever since. I've seen them in concert three times. They put on such a fun show! 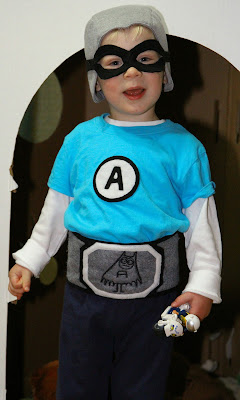 My little Aquabat! I am so proud of this costume! The goggles are just two layers of felt and elastic. I did a lot of top-stitching on them to help them keep their shape. It helped, but not as much as I'd hoped - they are kinda floppy. If I ever make another pair of goggles, I will use some sort of interfacing between the felt layers to keep them from stretching out of shape. The logo on the shirt is felt that I very carefully cut with an exacto knife. I stitched the layers of felt together before stitching the logo to the shirt. 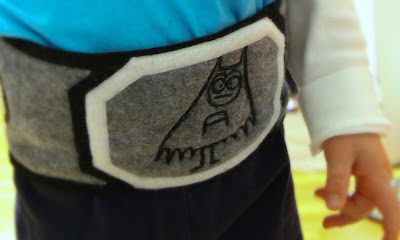 The belt is my favorite part. Two layers of black felt sewn together, velcro closure, layers of grey and white felt on top with a free-motion quilted Aquabat. This is by far the most successful free-motion quilting that I've ever done.

The helmet is made of grey sweatshirt fabric, and I started with the Winter Hood pattern from the Oliver + S book. I modified it a lot - taking in the seam allowances, making the middle section skinnier, and giving it a widow's peak in the front. I left the ears covered because a) it was less work and b) it'll be warmer. We live in Minnesota. It might snow.

This costume was a challenge and it took some time, but it was worth every minute! Isaac "helped" me sew (watching and/or sitting on my lap while I sewed) some of the costume, and he was so eager to try on pieces for fittings. We recorded the first time he tried the whole costume on and he was so excited he literally could not stand still - he was singing, giggling and dancing with glee! I honestly don't know who is happier about this costume - him or me.

Hope you all have an equally Happy Halloween!
Posted by carrie at 4:30 AM No comments:

I started my first pieced quilt over a decade ago. I joined a block of the month club at a local quilt shop, and I pieced one block every month for a year. Then I let the blocks sit around for a couple years before assembling the top. I had a friend quilt it, then let it sit around for another few years before binding it. That's how my first quilt also became my latest finished quilt, approximately 12 years later. Sigh. 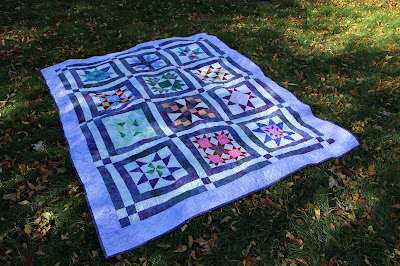 I am a little upset that a lot of the batiks bled, especially the blue that I used for sashing and binding, which is also in a few of the blocks. I put a few tablespoons of synthrapol and two color catchers in the wash, and there was still some backstaining. For the block of the month club, we picked up a little kit every month with instructions and just barely enough fabric to make the block - so there was no way to prewash the fabric. I've learned a lesson for next time though - always always always prewash batiks. 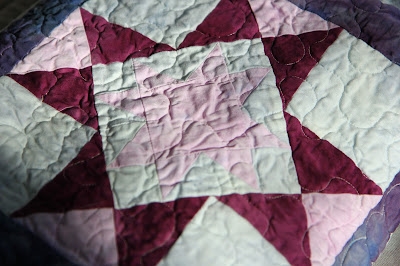 I do really like the quilt now that it's all washed and crinkly and (finally) ready to use.

Posted by carrie at 6:28 AM No comments:

Email ThisBlogThis!Share to TwitterShare to FacebookShare to Pinterest
Labels: block of the month, finished, quilting

I'm a big fan of Oliver + S patterns. Really, who isn't? The raglan t-shirt pattern may be my favorite yet, and it is by far the quickest to whip up. I recently made a couple raglan t-shirts, size 3T and 4T, that I'm really happy with. I found the Paul Frank fabric on sale at Joann's, and the blue (I think) came from the Textile Center annual garage sale. 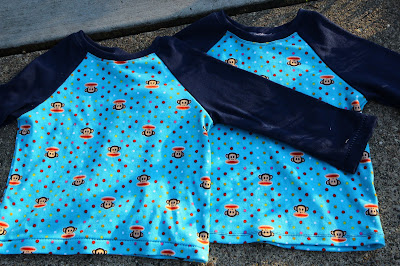 I tried out two different hems - on the left I did a blind hem with my serger. On the right I used a twin needle in my sewing machine. 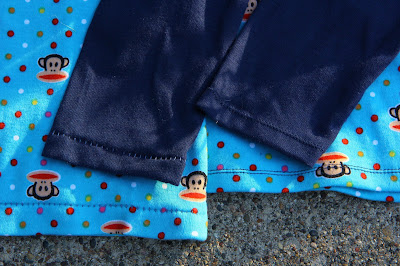 Cutting out the t-shirts took less than an hour, and serging the pieces together took about 10 minutes. The serged blind hem took approximately 17 tries and two hours. Ugh. I should have given it a few more tries, because it drives me crazy that it doesn't lay perfectly flat and the stitches are not even. The twin needle looks great but it's not nearly as stretchy as the serged blind hem. I prefer stretchier hems for kid's clothes, so I'll be practicing the serged blind hem for next time.
Posted by carrie at 7:00 AM No comments:

It's sweater weather again in Minneapolis. Although I like knitting wool garments and the changing seasons, I don't look forward to the first days of having to wear mittens and scrape frost off car windshields. The transition is made a little better when I have new handknits to look forward to. This year I finished three projects in time for the first frost. 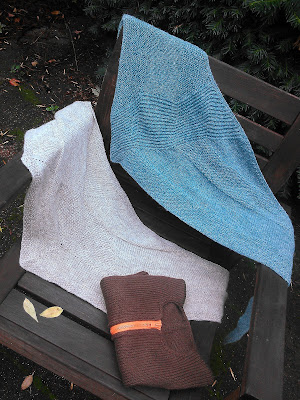 The blue shawl is Westlake by Stephen West. I knit it with a pretty heathered yarn my sister picked up at a state fair. I love the details on this shawl, but it turned out a bit small because I used US4 needles instead of 4mm (US6). I read the pattern at home, packed US4 needles instead of 4mm needles, and proceeded to knit the whole thing on a flight to India without ever re-reading the gauge section. Whoops. It's small but I'll wear it as-is, so I'm not going to reknit the darn thing.

The cream shawl is Blue Whale by Stephen West, also made with yarn gifted from my sister. This time I used the called-for US6 needles and the shawl turned out to be a good size.

I started the little brown sweater back in April for JC Briar's set-in sleeves class at Yarnover. The pattern is from her class handouts. I do like this method, and I'll use it again. I opted to finish the sweater with a zipper instead of a button band, and I'm super pleased with the result. Isaac seems very excited about this sweater and the orange zipper, so I'm optimistic it will get worn a lot this winter.
Posted by carrie at 7:00 AM 1 comment: