So... I've been developing my own black and white negatives for a little over a year now. I've probably developed a whopping six rolls or so, all using the powdered Kodak D-70 developer and Kodak fixer with results ranging from very good, contrasty negatives to extremely underdeveloped negatives. After much debate I have decided to switch to the liquid concentrate chemicals. Some of the pros include a longer shelf life (liquid chemicals in their concentrated form last indefinitely as long as they are stored in a way that minimizes their exposure to air) and more reproducible results. At least that is what I'm told.

I've purchased the chemicals but have put off developing any film for almost TWO MONTHS... I know, that's horrible, but I was hesitant to use my two rolls of vacation pictures as guinea pigs. Well, today I am deciding what the heck... I'm going to give it a shot. In my (limited) experiene, I have discovered that as long as you adhere to the basic directions (time, temp and concentration of chemicals) it is very hard to botch a roll of film so badly that you can't get a (mediocre, but usable) print from it. Hopefully today's experiment will not prove me wrong.

Here's a link to the technical specs for the developer (HC-110) and fixer (Kodafix) I'm using. The data for the fixer is next to nothing, but I think (hope) all I have to do is mix it in a 1:3 ratio at the right temp. Results to follow...
Posted by carrie at 2:55 PM 1 comment:

Email ThisBlogThis!Share to TwitterShare to FacebookShare to Pinterest
Labels: photography

Work in progress: ugliest socks ever

I knit one pair of socks just after Christmas and have only now started knitting a second pair. I found this yarn on super-clearance (gee, I wonder why) at a local yarn store and I just couldn't pass it up. Yes, I know it is ugly, but I love it! I absolutely hate wearing socks, and somehow having original, goofy or ugly looking socks makes the necessity of wearing socks in wintertime more bearable. It's Lanna Grossa sock yarn, 80% wool and 20% nylon and I bet it will make super comfortable socks. Here's the start of my first sock: 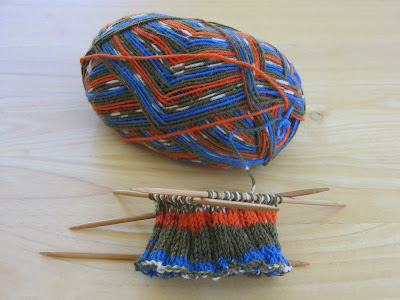 I've finished embroidering 17 flour sack towels with different designs from Sublime Stitching. The towels are all for my husband's family's craft exchange that takes place at Thanksgiving. Here's one of my favorite designs: 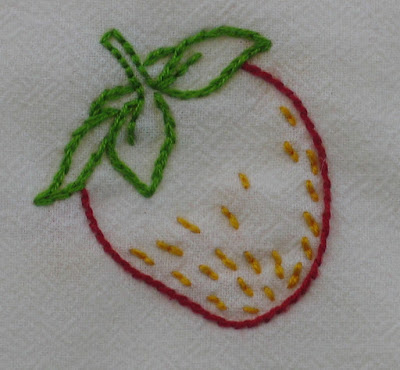